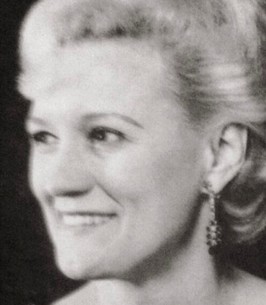 Anna Rebecca Smith, better known by her stage name Ann Herman, began her life of music by touching the keys of her family piano when she had just started walking. She said that it was like she knew what she wanted to do in life very early on. It was as if she knew the music would sustain her through all the ups and downs of a very full and long life. Having a professor of music for a father and an ancestry filled with musicians, how could she do anything else? In describing her own life she has said, “What a life I’ve had!” and “When I look back over my life, it’s a wonder I got to be this age.” Approaching her 100th birthday she said she never thought she would live so long. When asked what helped her live so long, her answers were always her music, focus on the good even in hard times and have a sense of humor. She lived this on a daily basis.
She started playing piano professionally with her father’s band during the Great Depression when she was just eleven years old. Her last professional gig was at the age of 92, when dementia started its insidious occupation of her brilliant mind. She played music daily on her Hammond organs up until the day she went into the hospital, just 4 days before leaving this earth. She had said that her playing was an extension of herself and that if she couldn’t play her music she would die.

After graduating from Steelton High School in 1939 she went on to attend Harrisburg Hospital School of Nursing. She was just shy of one month of graduating in 1942 when it was thought she had tuberculosis and was then confined to a sanatorium for almost a year. Surviving in a room with 40 tuberculosis patients she described as “hacking their lungs out every day,” and that at times she thought she would go crazy, she later attributed her great resolve and inner strength to surviving those horrors. Her right lung had been compromised though by pneumothorax treatments and remained a weak point throughout her life.

An auto accident driving home alone after a gig one winter’s night in the early 1950’s on an icy road, left her in a car folded in half up against a tree in the wee hours of the morning. She was pinned in the car for several hours and nearly froze to death when a nearby farmer finally heard the car horn and got her help. Her strong will and believing she would make it through again contributed to her inner strength.

She played a huge variety of venues and types of events throughout her 80 years as a Hammond organist and keyboard player in addition to teaching many students including devising a system of learning specifically for several blind students throughout the south central Pa. Area. She was the organist for many of the events at the Zembo Mosque in Harrisburg, Pa., Governor dinners and political events, innumerable nightclubs and fine dining restaurant music, as well as clubs at the New Jersey shore. For a couple years earlier in her career she played at the Lemoyne Roller Rink and the Rainbow Roller Rink, Mechanicsburg. She had quite a following in the 1960’s through the 1980’s and was a local celebrity, well known for her ability to play any song requested never missing a note, with impeccable timing and style. She believed that in playing her music she was able to help people enjoy their lives a little more. She received many handwritten thank-you's over the years for what her music meant to her fans. When she received the Central Pennsylvania Friends of Jazz Hall of Fame Award in 2018, she said it was like her Lifetime Achievement Award.


During her time as the organist for the Glenn Long Big Band Orchestra in the 1960's she met band member drummer Jim Young. Many years later in 2000, they became reacquainted and formed the duo Deluxe Edition with Ann on keyboards and Jim on drums and vocals. They started making beautiful music and stayed together until her death. In her words, Jim was “the love of her life.” They supported live music and theater, including regional jazz festivals, their favorite genre of music. Ann’s last live jazz attendance was just one month before her death.

Several of Ann’s children and grandchildren are also musicians, carrying on her legacy of the love of music.
Her love of the ocean led her to fulfil a dream of having a summer place in the Cape May-Stone Harbour area for over forty years where family enjoyed making many memories. She loved her many little white dogs throughout the years, from raising poodles to her final two bichons.

She was preceded in death by her two younger sisters, Gertrude Ellen Dopp, a pianist and nurse; and Martha Von Herman, opera singer and voice teacher.

She is survived by her partner, Jim Young, her daughter Lana Ryder and spouse Irwin Rosner, a son Charles Lentz(Brenda), and daughters Jackie Wizelman and Carol LoVece(Augustus). There are six grandchildren: Anthony, Angela, Star, Morgan, Lauren and Nevada. Five great grandchildren, Cole, Lilian, Addie, Ava and Roman, Two great-great granddaughters Isabelle and Cambria, and numerous nieces and nephews. Her 100th birthday celebration was a beautiful time of celebrating her life, and little did we know a week later we would be saying our final goodbye. To a life well-lived, filled with love, laughter and music!

Like she always told us, “You’ll always have hard times around you, but if you focus on the good it will help you get through it much better.” And, “Enjoy life more with a sense of humor and surrounding yourself with lots of good music... and maybe sometime you’ll hear a certain song and you’ll know it's me reaching out to you from the other side with a message just for you.”

In lieu of flowers, memorial contributions may be made to Central Pennsylvania Friends of Jazz, 5721 Jonestown Rd, Harrisburg, PA 17112, or at their website: friendsofjazz.org/donate .